The excitement was immense. I couldn't sleep well during the night. Because, tomorrow we were gonna ship the bikes to Chandigarh and start riding that very weekend.

We got scammed a little by the parcel service guys, but that was oki. Finally, the bikes were all packed and ready for the mountain madness. There was one problem though. The train was delayed by like a crazy 14 hrs. So weren't sure if we can stick to our schedule. I was not going along with my motorcycle as I couldn't squeeze in those extra 2 days of leave. So I fly to Chandigarh to reach the same day the train arrives.

It was a Saturday, the 27th of July. I reached Chandigarh sometime mid after noon. After making a few phone calls, I got to know that the boys will arrive early evening. It made sense for that siesta. Rested well, I went to receive the motorcycle from the train station and I should say that it went pretty smoothly. All gassed up, the machines were ready to roll. It was an early night and we leave for the mountains tomorrow. We would ride briefly through The Punjab, and enter Himachal Pradesh. The plan was to halt in Manali that night, get the passes for Rhotang La, etc blah.

The breakfast in Punjab was overwhelming. Grumpy, after a heavy breakfast we had to ride through boring  highways. We took it seriously easy that day. It took us almost 12 hrs to reach Manali. Mostly because we were chillin like Hippies. We stopped EVERYWHERE. There was this one time we stopped for a short break, got on the bikes and stopped again because I saw a snake. and there goes. We take another break. 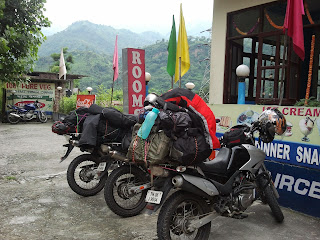 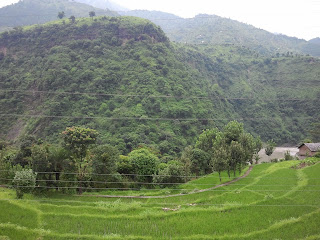 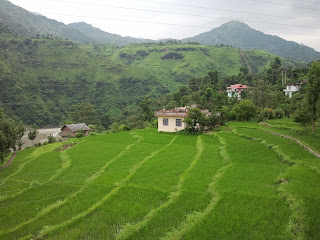 A special mention to the creepy tunnel. A 3-km-long tunnel, built on Chandigarh-Manali national highway at Aut, which is the only gateway to Kullu-Manali is sheer madness. Its a scary experience as the entire tunnel is wet and dripping with mountain water and the sodium vapor lights in the tunnel just dint help. After the creeps, you reach the great river Beas..

Buzzing through the Beas... 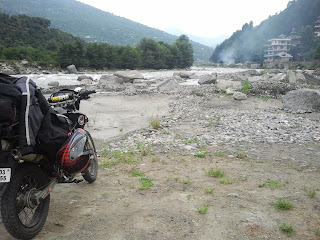 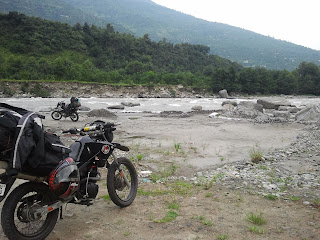 From here, The town of Manali was 40 kms. We reached there at about 7.30ish, but there was sun light and looked like this from the place we got our permits. 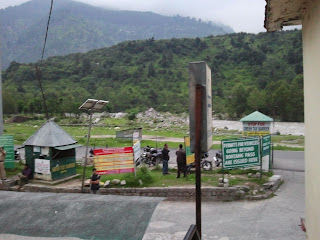 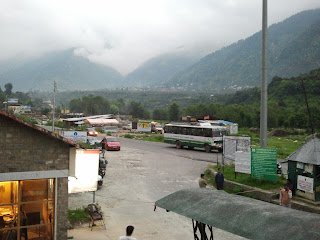 Tomorrow we climb Big and it was a Sunday well spent.
Posted by Alinel at Saturday, August 31, 2013
Email ThisBlogThis!Share to TwitterShare to FacebookShare to Pinterest