War-footing was the agenda. I had gotten all crazy that turned to mad, but now it was time to get over it. With all the misery haunting me one side, there were some serious advancements worth talking about.  2 of my friends decided that they will be a part of this adventure. The coolest part was both of them struck a Uber deal with Hero and got 2 brand new bikes. Now I had company. I was no longer the "lone crusader in a dangerous world". One of them even decided to lend his bike for taking measurements ( for things like the extra rail for carrying luggage, fuel can ..etc ). We chopped the M80's rear rail and made some minor mods to make this 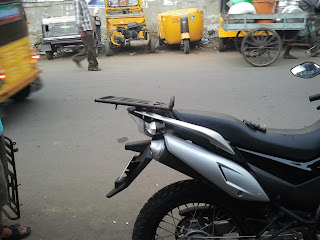 The loading area at the rear says that the Max load is 7 Kilograms. Monkey Crap. With hindsight, I can tell you that it can take the load of a complete person (preferably a midget weighing 80 - 100 Lbs). Short and sweet. It fits the bill and does the job well. 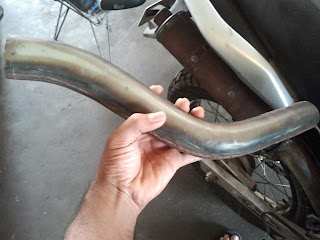 One of the 2 brand new bikes was going to be the exact same specification as the one I was building. So he had to make an exhaust system too. To celebrate our misery, we had a party that day. His motorcycle came in handy as well. As things were getting delayed, I had to completely strip it down to start the paint job in parallel. So the bike was not available to take measurements for the exhaust as it was nearing completion. My friend was kind & patient enough to lend his bike for making 2 complete systems. Here's shanker ( The tinker who makes exhaust systems in a winker ) doing what he does best. 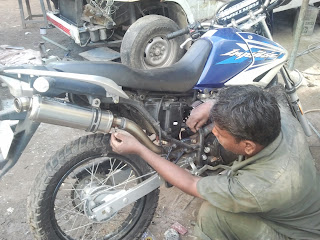 It was a sunday, and we had to parcel the bikes to Chandigarh on Wednesday by train. My house smelt like a paint shop that day. 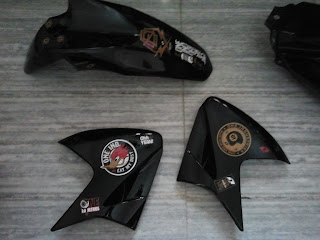 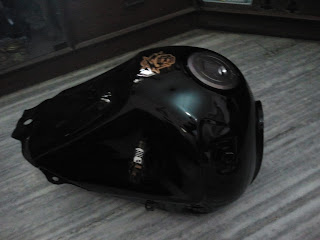 With just little bit of electrical work pending, and a fully done exhaust (thanks to shanker) 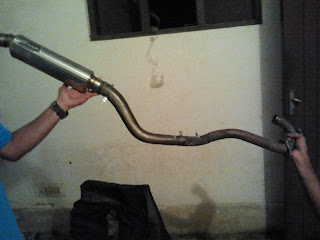 It was a job well done ...and we were ready to roll. 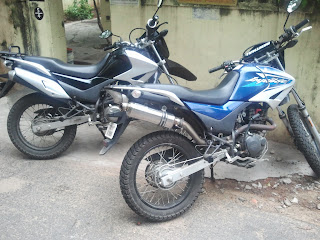 Posted by Alinel at Monday, August 26, 2013
Email ThisBlogThis!Share to TwitterShare to FacebookShare to Pinterest