It was 2014, a brand new year. Time flew. It was the end of January already and I was recovering from a moderately serious motorcycle accident. More like, I ran out of talent in one of the spirally corners of the awesome Dandeli forest enroute to Goa in Northern Karnataka, South India. I was riding to attend the 2nd edition of Bike Week. I had some soft tissue damage in my right hip, popped my right shoulder and missed my liver by an inch, Or thats what the doc said. The morphene was good, and I was in crutches attending the Bike week.  Cant complain.

I recovered pretty darn well, but it was very hard to explain to people why motorcycling is unforgiving and it always will be. Falling off a motorcycle doesn't make one stop riding. I was not going to stop riding either. Motorcycling is unforgiving. Period. I would like to think of it as a WIN. My road bike is a ER-6f, Which was totally totalled in Dandeli. I still had the cheap indian rip off of the crf 230 which I could hop on while I was waiting for the Kwaker to get fixed.

I was very promiscuous with a casual and unselective approach.  I had to do something to the motorcycle. Ideally one should change the front forks of the bike, but its relatively a lot of work, and nothing is a "straight fit"

There was significant and noticeable wear of rubber on the knobbies of the stock tyres, as I was having way too much fun in the city riding on pot holes and catching air time in speed bumps

The tyres had a decent few thousands of kilometres left, So meh.

However, I was rather curious about testing a 33mm carburetor (Pulsar NS200) along with the BBR Bigbore kit (240cc kit, however, please beware that its only a 230cc kit and BBR people lie just like everyone else) which is a straight fit. Now how about that ?

So I was relentlessly searching for the best deals on the internet. I was all over crfsonly, amazon, motosport and many other websites. You could easily say that I was "addicted" in Feb 2014. Finally after much research and time, I had someone who could handcarry the parts and saved me some $'s on shipping it. So, I got my hands on this.. 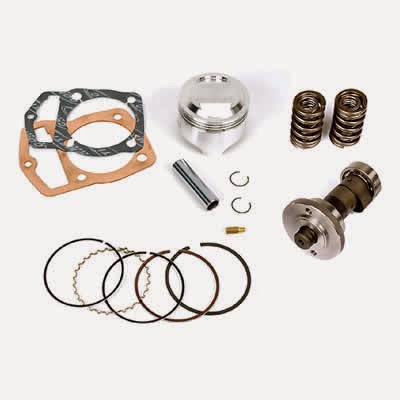 The kit comprises of the following:

& Requires professional boring of your stock cylinder. I replaced the inlet and exhaust valves, the rockers for the cam and a whole bunch of things that I want to abstain from writing about. With the momentum, My friend and I designed a exhaust shield for our custom made exhaust and some modifications to our "ADV" luggage carrier to hold upto 10 lts of fuel in 2 auxiliary cans, 5 lts each.

I even managed to order a windscreen of a harley davidson that was a straight fit. Double wammy !

I felt all cool and epic that day, that moment of triumph ... spending all your money on a dirtbike, sometimes I wish I can get all that money back, to buy more stuff for the dirt bike ..

Posted by Alinel at Tuesday, September 09, 2014
Email ThisBlogThis!Share to TwitterShare to FacebookShare to Pinterest