I was way behind schedule with the 3 night halt in Manali. We had to really start munching miles. We would start our epic ride today on the legendary Leh-Manali highway.

This was our route map.. 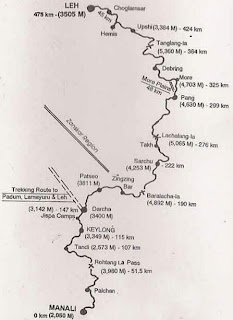 With my leg fully operational again , we began to ride early in the AM. This to me is the quintessential mecca of all road trips on a motorcycle, which involves crossing five high altitude passes in a span of 2 to 3 days. ("la" means pass)

On our way up top to Rothang, we saw heaps of people in cars doing the same road trip. To do these very roads on a motorcycle, its like a new trip altogether. On the motorcycle its just different. Its more intense since you are completely exposed to the elements. The sheer thrill of pitching man&machine against the elements and riding so high that after day 1, you are often higher than the maximum permissible ceiling for commercial skydiving, which is 15000 ft. I cannot explain that sensation with words. One thing was sure, I was gonna come back .. again and again, because this was never gonna get boring. EVER.

With that said, we rode Manali - Rohtang - Kokhsar. Here we stopped for some quick dal and rice and were on our way to Tandi, the last fuel station to gas up. I remember waiting here forever. The reason was, the fellow dirt bike rider (on the stock impulse) was not within our vicinity.  After talking to a couple of locals we were told that a motorcycle looking identical to ours had met with a road accident and the casualties were taken to the Hospital in Keylong. This was not good. But we weren't sure till one of the passer by mentioned a "red riding jacket & blue water bottle". It was definitely him.

We rushed to Keylong and found out from the local police that he had collided with an elderly woman on the highway little after where we stopped for lunch. We had to stay in Keylong till we could sort this out with the cops and the relatives of the elderly woman.

Here's a glimpse of Keylong from the town, where we had to stay for 3 more days. 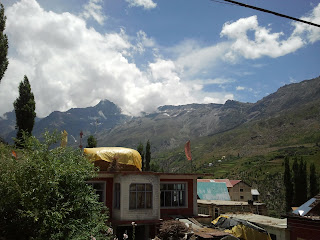 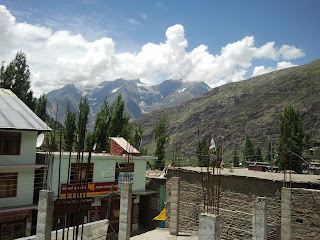 The scenery tends to change once the Lahul and Spiti Valley gets engulfed by rain clouds .. 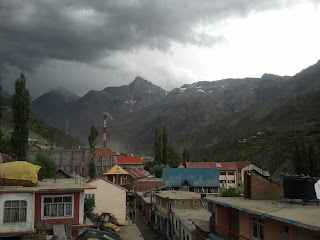 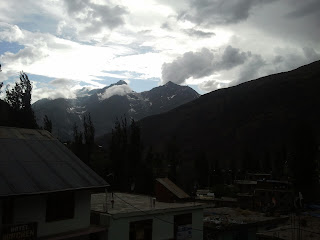 In spite of the awesome scenery, things were not great at the moment. The Cops had us in a "Hotel Arrest" situation and confiscated the keys of one of the two motorcycles. Yep, you can conclude that we were a little bit stuck with the whole situation. Not having cell phone signal was the least of our worries.

But the cool thing about rock bottom is, the only way out is UP.

Posted by Alinel at Thursday, September 05, 2013
Email ThisBlogThis!Share to TwitterShare to FacebookShare to Pinterest