As as you can see there was a good cloud cover that day and probability of rain. The terrain and landscape changed from grey to red. The first thing that came to my mind was the movie  "Total recall" . The production crew could have saved a load of money shooting the movie in the Himalayas. Hmmm..or Maybe not.

The transition was slow as I rode pass some serious off road and starting my ascent to lachulung la, the 3rd & final high altitude pass for the day. By now it was already mid afternoon and & with No sun on top it felt great to be on the road,  in spite of the bouncy ride. 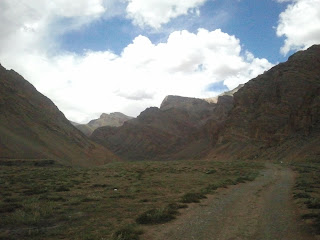 It was time to take that break and chill in the shadow zone. 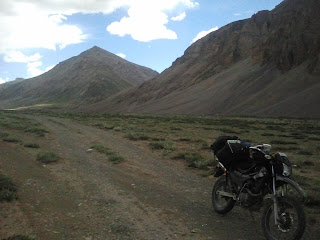 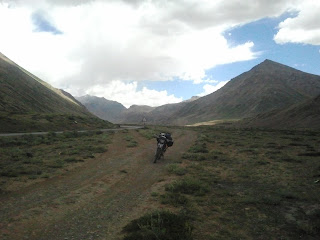 Now that probability of rain just went up. In fact, It started drizzling a wee bit and it was time to cover the luggage with rain proof gear. Now its quite evident, its Red ! 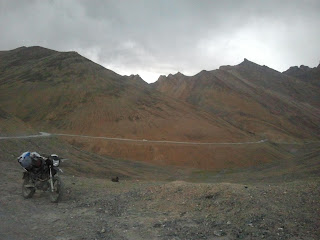 It stopped raining up top. However, it was not a good idea to stay here for long. Right after this photo and some water I was on my way. 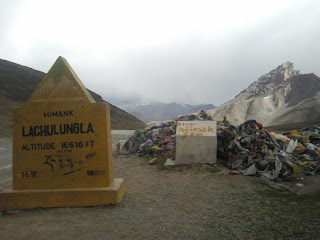 Obviously the way down is much faster. With the rain not bothering my ride anymore & the luggage to give me that extra traction, it seemed I had temporarily lost my senses. I was having way too much fun. As luck prevailed, even the roads got better. I was rolling through the gears with ease as I had now gotten used to the bike, especially after the 2 falls. My experience on a dirt bike was rich now.

Sometimes carried away by scenery, I had to make sure I focused and kept my eyes on the road. Riding the middle patch was dangerously slippery, especially where there was finer gravel patches. I almost had a close call and stopped to re coupe from the situation. DISASTER. Maybe, losing your senses is a bad idea. 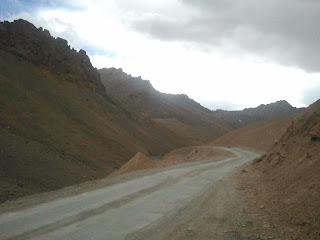 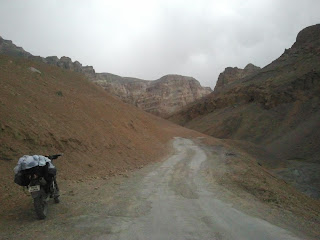 I am looking at this photo from my camera and realise that my spare fuel can, full of petrol is missing.  FAAAAAk..and the terrain looks the same everywhere, with absolutely no reference that can be marked. There are no trees or objects or vegetation or things or people or any god damn thing. It was around 1.45 pm and I was flippin BALLZ.

To make things worse, it started to rain. Yes, Murphy's law. I felt very insignificant in the mountains now. I was frantic in the beginning riding back and forth, and almost came to the place where I started to climb the pass that I had just crossed. Then I turned and rode in the right direction. Stopped, flipped for a while and rode back again. This continued for 2 hrs. I felt homesick and missed the easy city life, I almost had tears in my eyes. In a very profound way, I was just space dust and it wouldn't have mattered if I had a million bucks now. Here was another screw up that was staring right at my face. Electrical's. I had no time to fix it before I could ship the bike. Which means, I dint know what speed I am going, How many kilometers I have traveled and NO fuel gauge. I wasn't even sure of the distance to empty or the fuel efficiency. I was pretty screwed. 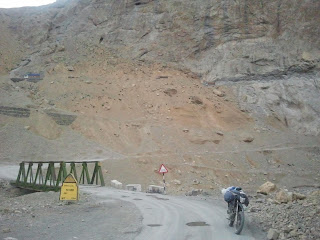 After a good 3 hours of no luck and no soul passing by, 2 Royal Enfield rides (from heaven) came by. The conversation lasted 2 mins..

The rainy road to Pang 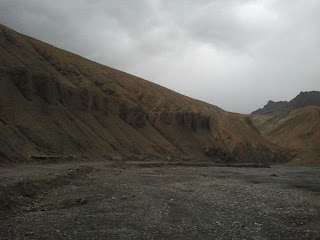 Luck prevailed again, and I was reunited with my fuel can. First things first,I filled fuel. 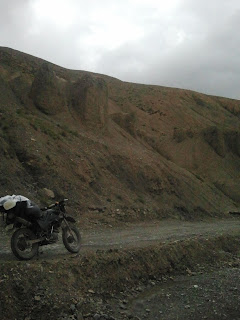 My water refill station, glacier water from the mountains. 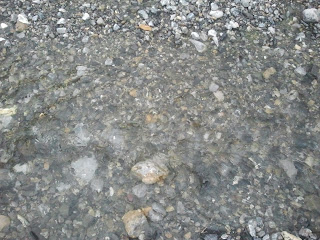 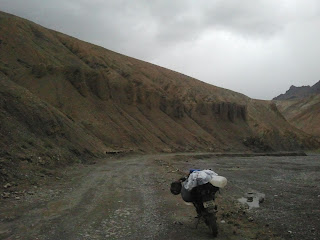 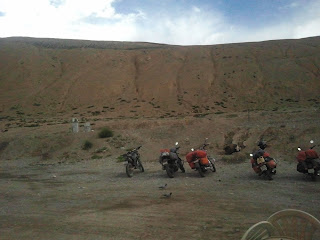 Finally Pang. I reached and the rain stopped. More Bikes = Company & since I had not seen these guys on my way here, my guess was they were riding back from Leh. I guessed right. The evening was filled with goofy motorcycle conversations.

It started to rain again. The weather up here was so unpredictable. 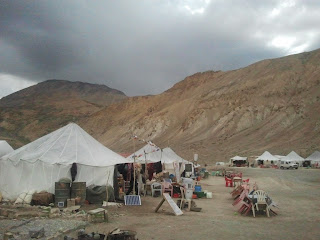 There was Sun on one side and rain clouds on the other. Combined, The sky was utterly surreal. My jaws dropped. 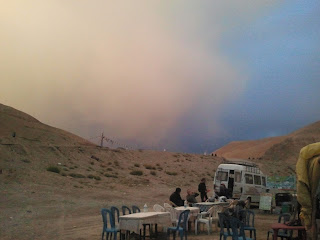 And then, before you notice evening sky changes to this. I felt a little insignificant again. 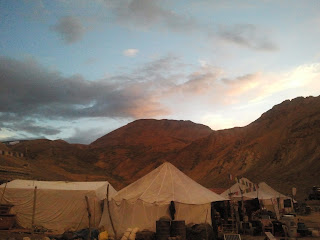 So, it was mission accomplished. I had to rest well, eat whatever I could lay my hands on & sleep early. It got quite cold that night. My "not so awesome" sleeping bag did not work. I went to sleep dreaming how I was going to get Leh'd the next day.

Posted by Alinel at Friday, September 13, 2013
Email ThisBlogThis!Share to TwitterShare to FacebookShare to Pinterest