Every day from today will be glorious and nothing short of Epic. Paved roads, No roads, Single lane tracks & trails is pretty much what it is, A Side of India few travelers know Exists...

We started our day with shallow rocky shoulders stretches and slowly finding your way through small villages to the eastern side of Kunzum Pass. It would take us 3 days to reach Kaza khus and we would begin our ascent towards Kunzum which was open for tourists only a day before our departure from Delhi. We wanted to halt at Parwarnoo on Day 1, however with lots of mile munching we were closer to Narkanda, which was our halt for Day 2.  So we gunned to reached Kalpa.

Apparently, what we were riding was the NH22. The roads were rather dusty and glory just began. From what I recall, everyday the condition of the roads kept deteriorating, bringing more glory. It took us a decent 3 days to get used to packing our luggage and reaching the state of "fall free". In Hindsight, Fall free is such an illusion ! 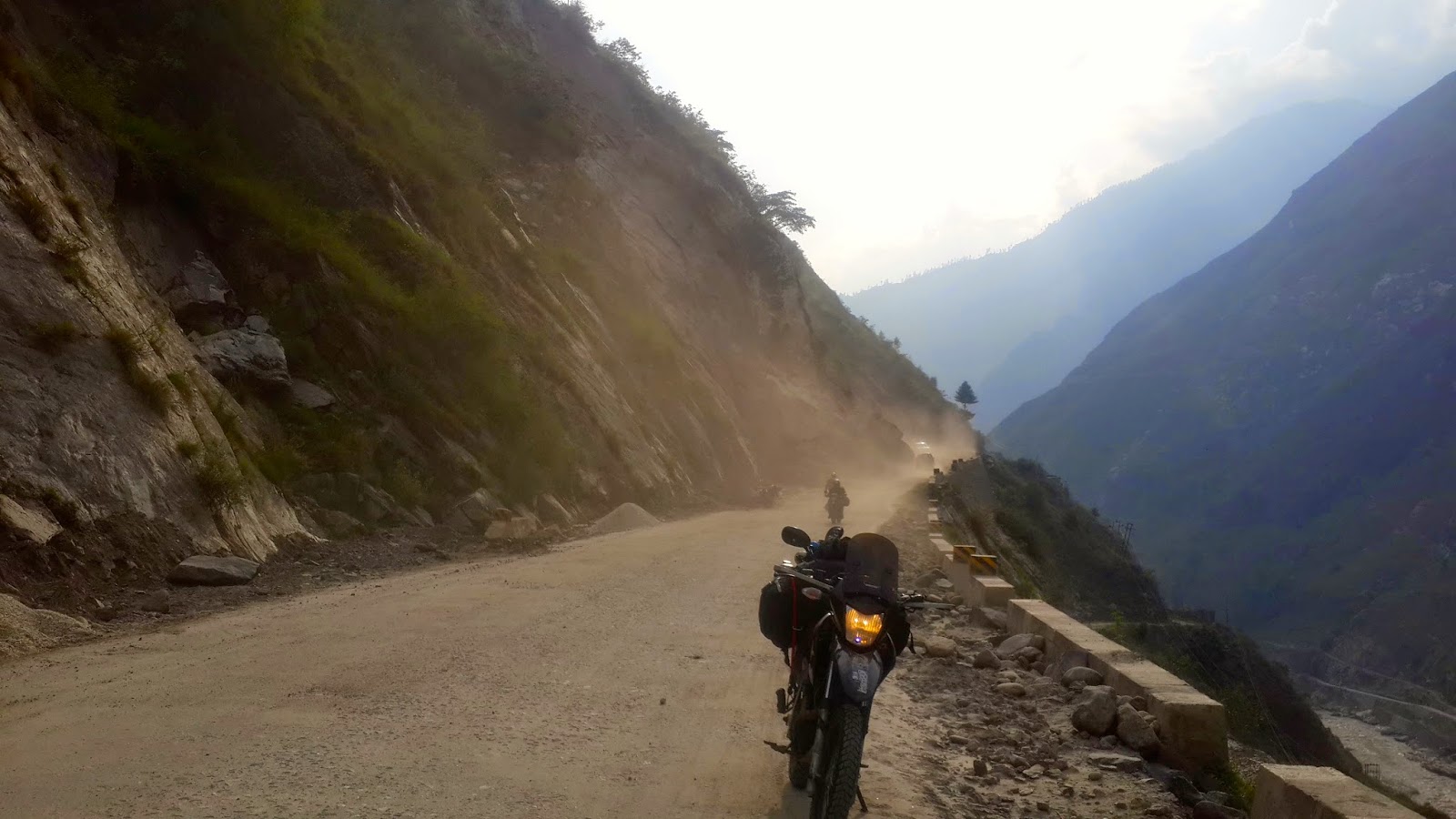 All day on that eventful day, we were riding beside a tributary of the Great Sutlej. All I can say is, she was alive ! Its more than just background sound as she eventually paves the way slicing through the valley. It was quite sad to see dams being constructed. Dams block free flowing water, and that sucks. Soon, there will be no white waters here after the hydro projects begin in full swing.

The roads are non existant. Its just mud and dirt all the way till you reach the little town of Rekong Peo, and then ascent to Kalpa, a little village uptop.

Why would people build a dam and get rid of all this awesomeness ? I just didn't get it. China and India are already in a geopolitical cold war like situation with the rivers of the himalayas. Oh yes, I am talking about the Bhramhaputra. The Zangmu Dam is under construction now in tibet. Whats more alarming is so called "Tibet's largest hydropower station", The Zangmu was partly operational this Sunday (Yes, Yesterday ..The 23rd of November 2014).  This is bad news. Remember the flash floods in Uttarkashi last year ? Well, we can expect many more in this region of northern eastern India, and the Zangmu is solely to be blamed. Sometimes civilisation as a term is abused quite much. To generate an estimated 2.5 billion kilowatt-hours of electricity annually, the indigenous people (mostly tribes) are going to get displaced. Remember James Cameron's Avatar ? Yep, Same story. The truth is none of these tribal people need the 2.5 billion whatever and have been living in peace and harmony. All of a sudden we just want to screw with their livelihoods and go bat shit on them.

If you want to help the cause, you can sign the petition here

It was a glorious day indeed. The next morning was epic'er .. I saw a Moth, The Kinnaur Kailash from little Kalpa and even ate some stolen apples from the previous day..


Posted by Alinel at Sunday, November 23, 2014
Email ThisBlogThis!Share to TwitterShare to FacebookShare to Pinterest