To the Chinese Border

It was a hot day in Leh, with the temperature in the low 30s. The previous night we received our passes to cross Chang la, the third highest motorable pass. It was concluded that we would not ride to Marsmik la as the army no longer allows tourists there.

Our plan was quite insane. We wanted to reach Pangong Tso and return the same day. Pangong Tso, Tibetan for "long, narrow, enchanted lake", also referred to as Pangong Lake, is an endorheic lake (A closed drainage basin that retains water and allows no outflow to other external bodies of water) in the Himalayas situated at a height of about 4,350 m. It is 134 km long and extends from India to Tibet / China.

This meant covering 340 kms and climbing the mighty Chang la twice that day. However, we were only backpacking, which means no church and no kitchen sink tied to the bike. We started late, as usual. We stopped in Karu for a small bite, and we were off. Reunited, we were in some serious mood for riding that day, and there was no better destination than the world's 2nd largest salt water lake at almost 15000 ft.

The Climb to the mighty Chang La 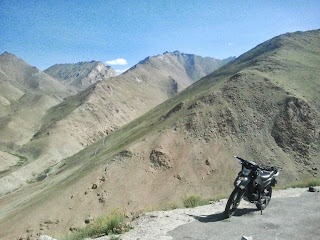 Leaving leh behind, the terrain changes again soon after Karu, once the ascend begins. 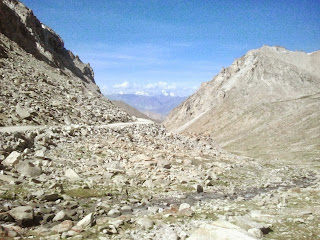 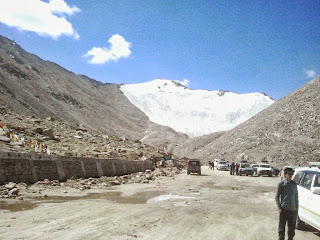 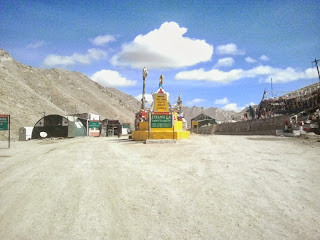 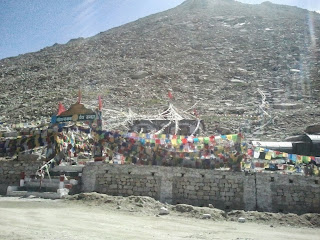 Some where behind that last mountain lies China 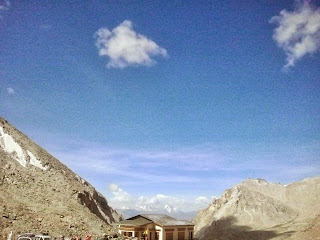 I should mention this cool idea from a friend when I was planning this epic trip. It was to collect rock and terrain samples.This was not for scientific analysis, but just to remember these places by the earth they occupied. After returning home, the samples just blew my mind because of the contrast in colour and the difference between the samples. I can say this was one of the coolest objects I got back from the trip. Samples included river bed sand to high altitude sandstone, at one point I was afraid that I was going to run out zip lock bags.

Adding a little theatrics to anonymity, my friend and I anonymous in the middle of no where. 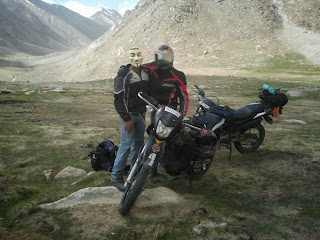 Wild horses give you goose bumps when they start running together in groups. Especially when you are riding besides them. 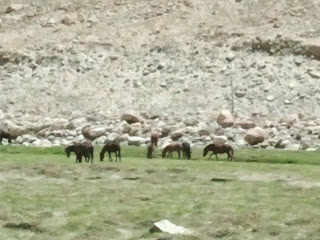 Fine, beach like sand on the way to the lake.. 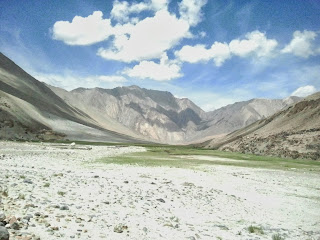 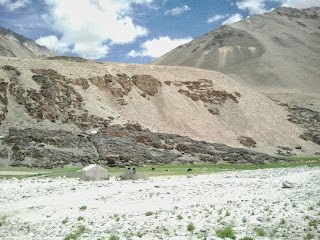 A small water body before we found some shade.. 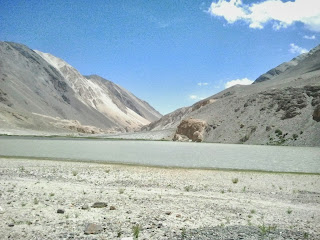 You capitalize on the Sun's position. As there are no trees here to offer shade. 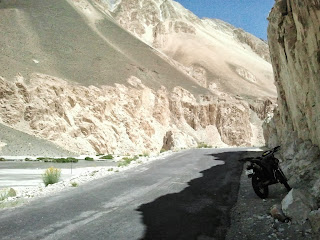 More fine, talcum powder like beach sand in the himalayas ? 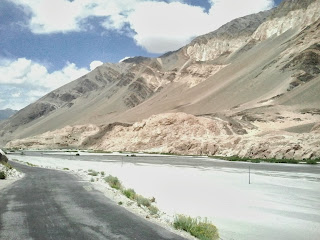 A family of Yaks crossing the water patch 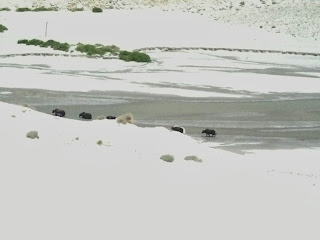 With 4 hours of riding, we had the first glimpse of the lake, as blue as the sky, It was an afternoon that seemed to last forever. 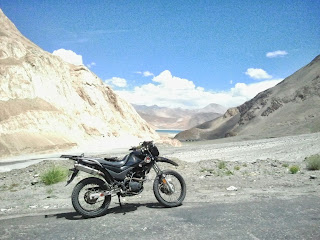 Blue as cobalt, Blue as your nose on a cold day, Blue as melancholy, Blue as a whale, Blue that blew our minds that day. 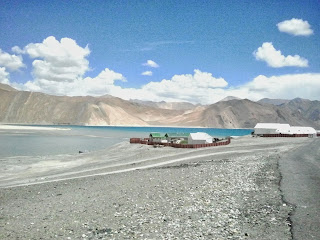 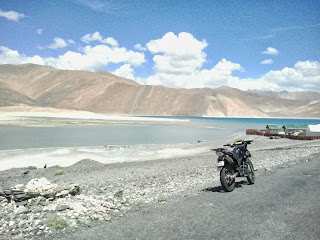 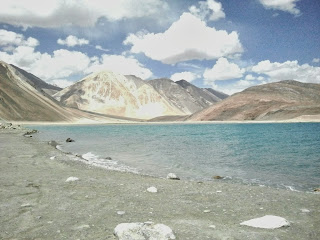 Blue and beautiful, like skies seen through & The sleeping wave.. (Thomas moore quote) 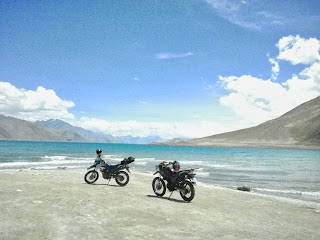 Sleepy waters that were too cold to take a dip. 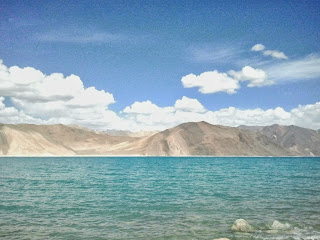 Here on banks of the lake, we met with a Spaniard who was riding his africa twin from barca to sydney. Huge respect. 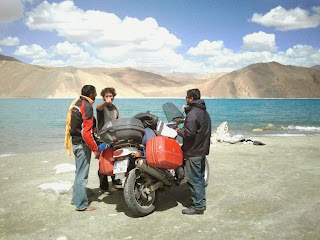 Our bikes looked like tiny mosquito's compared to what the Spaniard had packed. 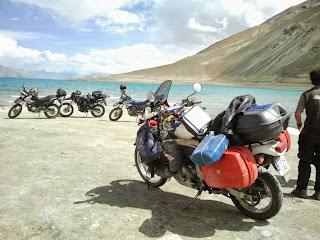 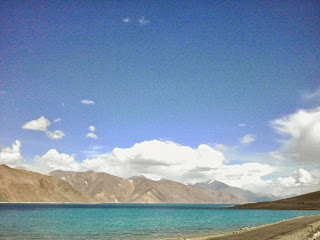 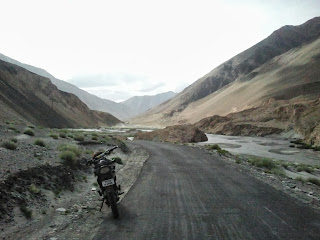 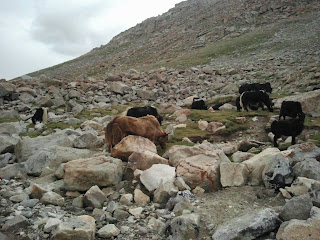 Finally some snow on our way back uptop the pass. 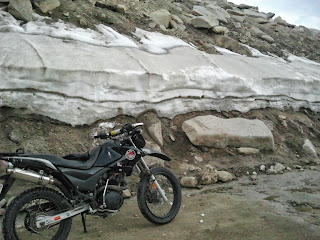 A Dirty snow ball that went into my friends Tee. Courtesy: Self 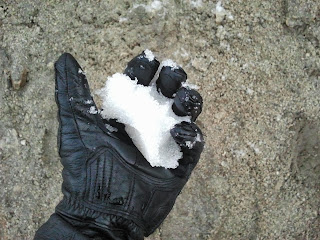 Tired and hungry, the mood swings were intense compared to how we felt that morning. We had to keep pace and reach Leh as it was now getting dark, slowly but surely. The gutsy winds made the ride more intense. With great difficulty, we endured to reach Leh by 830ish and straight proceeded for what I would like to call a "Big dinner" followed by apricot crumple  from the pumpernickel German bakery.

That day I felt like a python after dinner. It was time to sleep as the body was depleted from all energy and refused to listen to the brain. Next days plan included finding a group for climbing & planning the next ride, the ride to the top of the world - Ktop.

Posted by Alinel at Tuesday, October 01, 2013
Email ThisBlogThis!Share to TwitterShare to FacebookShare to Pinterest